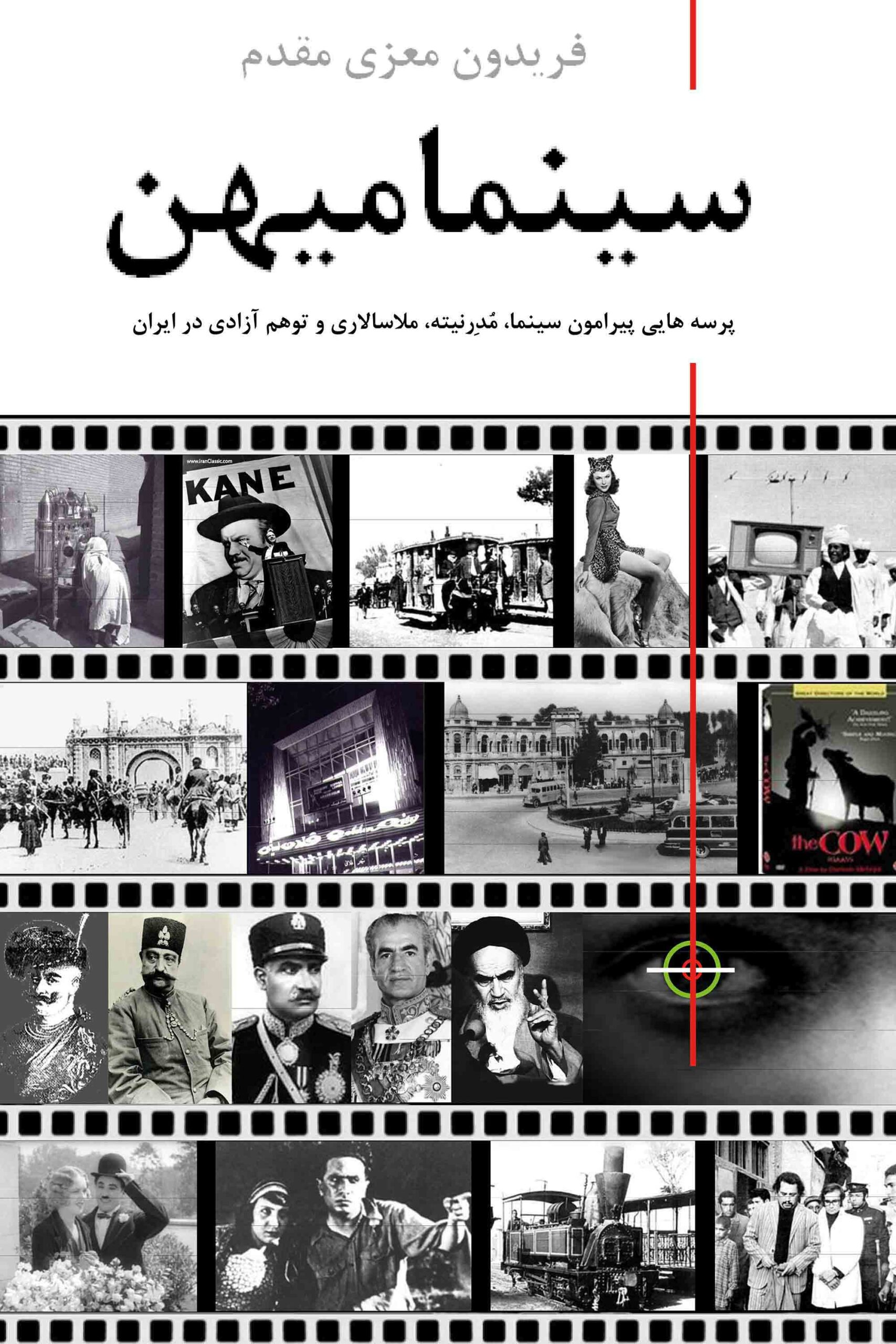 “Cinema Mihan”, means “Homeland Movie Theatre” in Persian, but saying it in an ironic tone in Persian or Farsi, the language in which this book is written, it also means “Spectacular Homeland” too. “Cinema Mihan”, written by Fereydoun Moezi Moghadam, a socio-cultural old student and writer, also a professional “cinéphile”, is not a book on Iranian cinema, nor a book on the history of cinema in Iran, but rather an enterprise, taking Iran’s modern history as a movie theatre, where the screen lends itself to numerous sharp and witty notes on social, cultural and political events over three centuries in a country that has never been freed of its devastating Asian feudal structure including an ‘up dating’ theocracy only with mobile phones and Internet only for arresting and killing all dissidents and dilapidating free lovers… In “Cinema Mihan” there are “trailers” in words of many Iranian cultural, social and political “movies”, from “Encounter with Modern Kind” to “Everything You Wanted To Know About The Post Revolution Demographical Explosion of Iranian Film-makers But…”, “Why Every Film Festival Must Have An Iranian Winner Too?”, “Deep Throats of Foreign Film Producers”, “Juliette Binush + Magnificent Abbas Kia-Rostami”, “Citizen Golestan”, “Trotskyites Who Voted Khomeini and his Islamic Dilapidations”. Trailers of “movies” such as “Rossellini in Fascist Italy and Mussolini, as Kia-Rostami, Makhmalbaf, Ja’far Panahi and Others in Islamist Iran and Khomeini…”. More “clips” of “Elites + Intellectuals, Hypocrisy + Betrayal”, “A King who Wanted To Be A Man” which was shown also under the title of “A King Who Never Was” with a sequel: “An Ever A Virtual Nation”, “Yes! Oil Can!”, “The Ascend and Fall of A Popular Prime Minister”, “Five Hundred Years of Religious Persecutions of Minorities”, “How To Convert An Inevitable Fall Into A Fake Revolution”… Many other tips; scenes of “movies” such as “Closely Observed Iranian Films, Propaganda and Censorship”. “Cinema Mihan” also has discovered forgotten archive rushes from ‘tragic films’ such as “Reagan’s First Day + Hostages Go Home”, “Oil and Nationalism”, “1953, The Cheapest Coup d’état ever made by CIA”…many others. This is really a book on “Movie of Iran”. An over ten years personal socio-historical study + research, going beyond the swampy and corrupted Qajar Dynasty, when cinema was introduced to Iranian society, to another bloody and rotten order, that of Safavid, over five centuries ago, when Shia was forced as national religion and when in a French travelogue, one can read: “There were about 12000 tax payer prostitutes in Isfahan of “all Shia Shah Abass time…”. A founder member of Iranian Writers Association, Fereydoun Moezi Moghadam has offered a must reading for not only all film-lover Iranians but also for those who are looking for a daring pen on modern social history of this country, this cinema, this Iran.