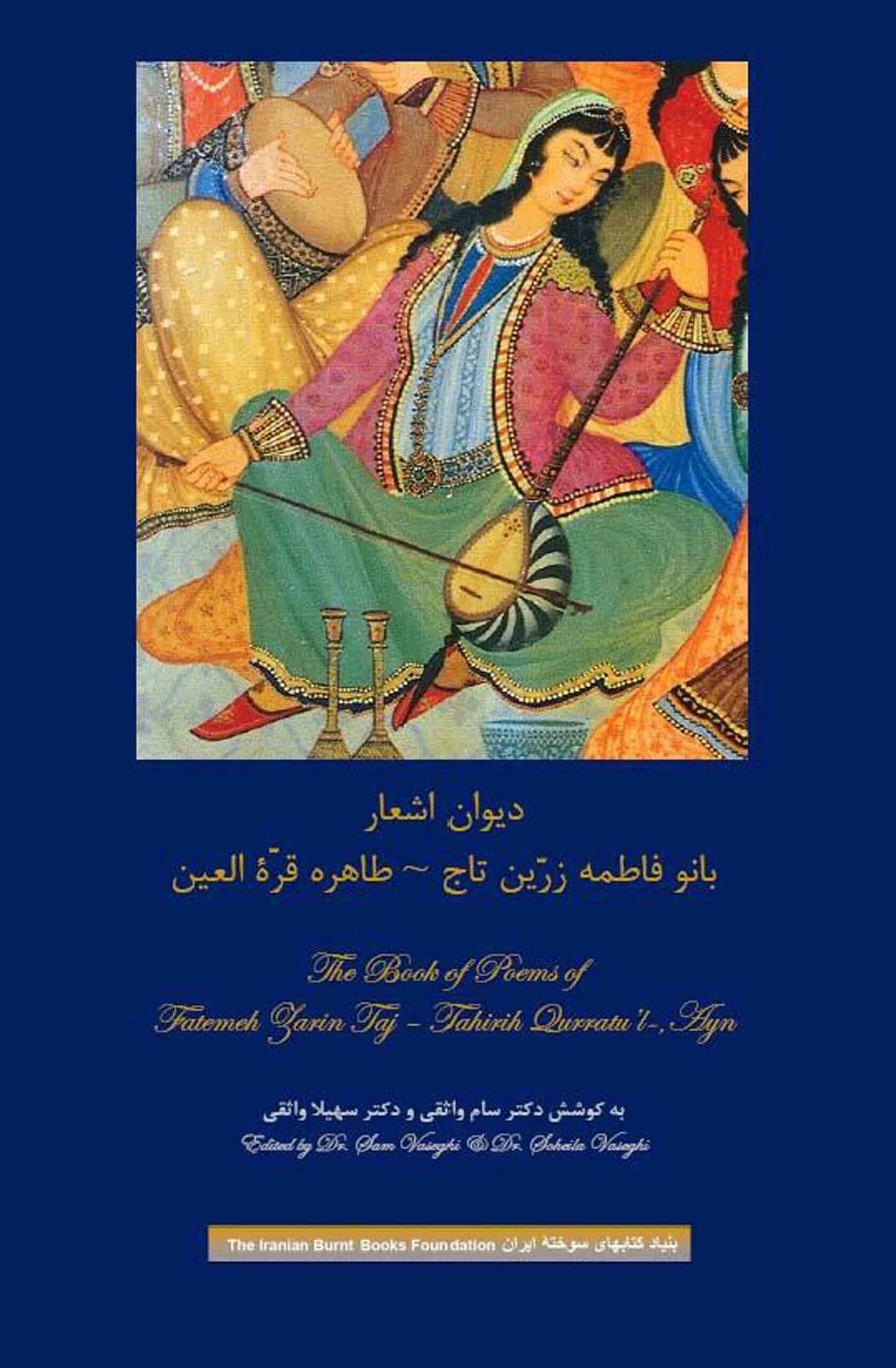 The Book of Poems of Fatemeh Zarin Taj

This is the Book of Poems of Táhirih Qurratu’l-`Ayn in original Farsi and Arabic. Táhirih (Arabic: “The Pure One”) or Qurratu’l-`Ayn (Arabic: “Solace/Consolation of the Eyes”) are both titles of Fátimih Baraghání (1814 or 1817 – August 16-27, 1852), an influential poet and theologian of the Bábí Faith in Iran. Her life, influence and execution made her a key figure of the religion. The daughter of Muhammad-Salih Baraghani, she was born into one of the most prominent families of her time.

As a young girl she was educated privately by her father, Mulla Muhammad Salih Baraghani, – a phenomenon of a girl at the time – and showed herself a proficient writer. Whilst in her teens she married the son of her uncle with whom she had a difficult marriage. In the early 1840s she became familiar with the teachings of Shaykh Ahmad and began a secret correspondence with his successor Sayyid Kazim Rashti. Táhirih travelled to the Shi’i holy city of Karbala to meet Kazim Rashti, but he died a number of days before her arrival.

In 1844 aged about 27, she became acquainted with the teachings of the Báb and accepted his religious claims. She soon won renown and infamy for her zealous teachings of his faith and “fearless devotion”. Subsequently exiled back to Iran, Táhirih taught her faith at almost every opportunity. The Persian clergy grew resentful of her and endeavoured to have her imprisoned and stopped. She battled with her family throughout her life who wanted her to return back to the traditional beliefs of her family. Táhirih was accused of immorality by clerics and courtiers, but it is generally believed that these allegations were unconvincing and created to undermine her position and influence.
Táhirih was probably best remembered for unveiling herself in an assemblage of men during the Conference of Badasht. The unveiling caused a great deal of controversy and the Báb named her Táhirih (meaning “the Pure One”) to show his support for her. She was soon arrested and placed under house arrest in Tehran. A few years later in mid-1852 she was executed in secret on account of her Bábí faith. Since her death Bábí and Bahá’í literature venerated her to the stage of martyr, being described as “the first woman suffrage martyr”. As a prominent Bábí (she was the seventeenth disciple or “Letter of the Living” of the Báb) she is highly regarded by Bahá’ís and Azalis, and often mentioned in Bahá’í literature as an example of courage in the struggle for women’s rights. Her date of birth is uncertain, as birth records were destroyed at her execution.

In most she talks about her longing to meet the Báb. Her poetry illustrates an impressive knowledge of Persian and Arabic literature which Táhirih possessed, seldom seen in a woman in mid-nineteenth Iran. One of her most famous poems is named Point by Point. In it, Táhirih ponders what it would be like to meet the Báb, and is widely considered her signature poem and a masterpiece. When Táhirih was killed, hostile family members suppressed or destroyed her remaining poems, whilst her others were spread across Iran. It has been suggested that Táhirih had little interest in putting her poems in print. `Abdu’l-Bahá recalls that when he was aged five Táhirih would chant her poetry to him in her beautiful voice. Edward Granville Browne procured her poems from Bábí, Bahá’í and Azali sources and published them in his book A Year Amongst the Persians. Recently some scholars have claimed to have found new poems attributed to Táhirih, but these have not gone without controversy about the authorship (source wikipedia).